An End to Cursive Writing? 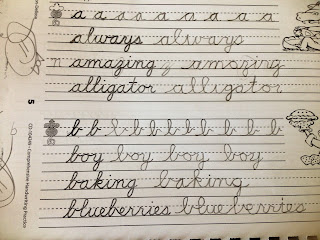 As my son prepares for another year of school, I've been working on his handwriting skills over the summer.  I love nice penmanship.  As his manuscript became better and better, I decided to start the skill of cursive writing.  I was so excited to teach him, as I remember loving cursive in school.  We sat down, we went over letters "a" and "b", and he mastered it in his first try.  I was so proud of him that I took a picture, posted it to Facebook and we even showed grandma and grandpa via Skype.

However, my parade was rained on when grandma and grandpa told me that cursive is no longer part of the Utah curriculum since 2010, and they aren't in the minority.  Districts all over the country are dropping it from curriculum, as keyboarding skills become increasingly important.  Really?  You're just going to drop writing?

I'm torn on this subject.  Cursive is beautiful.  It requires coordination, motor skill development and the use of the left and right sides of the brain.  It looks pretty.  People love getting mail addressed in cursive.  There's just something special about it.  And now it might be gone.

Apparently Utah schools will decide for the upcoming 2013 school year, whether or not cursive will be brought back into the core curriculum.  Here's hoping so.

Where do you stand on the cursive debate?
Email ThisBlogThis!Share to TwitterShare to FacebookShare to Pinterest