Something happens inside a child's mind when they see their first rainbow.  They are mesmerized.  "How did it get there?"  "Can we go touch it?"  "I wonder where it goes!"  They don't care that there's a science behind it at a young age, they don't want to hear about ROY G. BIV, they just want to oooh and ahhh and the beauty of nature.  The innocence behind a child's love of a rainbow is actually quite beautiful.  And then when they see a double rainbow!  Watch out!
My kids are now 6, 5 and 3.  They are super rainbow spotters.  In the sprinklers or in the sky...even on the floor from a window, they find them and squeal with joy.  Every so often, they'll ask for rainbow food.  Now, as a mom, I look at some of the rainbow foods and think...ewwwww.  Look at all that food color, and really, who wants to eat green or purple food?  Ha!  But, the look on their faces when I come out of the kitchen with something rainbow-riffic is so much fun for me!

The first rainbow food fun we had were rainbow pancakes for St. Patrick's Day 2010.  It was a total surprise to my kids.  When I brought the plates out of stacked rainbows, they giggled with delight...and wouldn't you know, ate almost every bite!  That was a really fun one to do.  The secret in sharp colors is to use frosting gel colors...like Wilton's brand.  I did red first and worked my way to purple.  A lesson learned...keep your heat low enough and your butter or spray free from browning...my purple pancakes got a little singed. 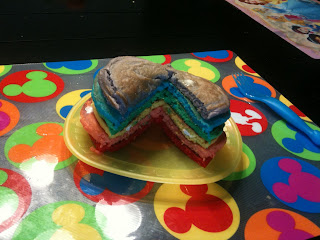 The next rainbow adventure we  had was St. Patrick's Day 2011!  Something about St. Patrick's Day and Leprechauns brings out the rainbows in our house.  This time, I went with rainbow cupcakes.  The process was basically the same.  I had one main batter, divided into individual containers, and added coloring gel to each one for each color of the rainbow.  I started with purple on the bottom and ended with red on top.  I learned a lesson here too...to fill too much...my colors kinda exploded up the middle, which made a cool effect when cut, but not what I was going for.  The rest of the cupcake stayed perfectly layered...but the middle looked like a volcano.  Now, in the frenzy of party prepping, I forgot to cut on in half and show you the inside, but you can see the tops, and imagine the pancakes. 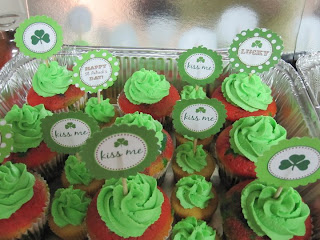 The most recent rainbow affair we had was for my daughter's 5th birthday.  She requested a chocolate, heart-shaped, rainbow cake.  While my first thought was to go with a layered rainbow cake much like the cupcakes and pancakes, been there, done that.  So, I opted for the rainbow frosting.  Again, I used the gel colors to get the vibrant colors needed for a rainbow.  This might have been more fun to make than the others as I got to put the color right where I wanted it, and it stayed. 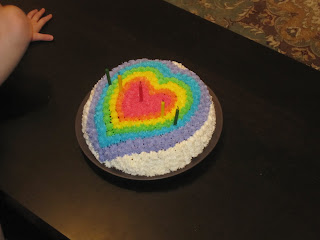 Bring a little rainbow love into your life.  It's fun and brings smiles to all those little faces we love to see light up.
2 comments:
Email ThisBlogThis!Share to TwitterShare to FacebookShare to Pinterest

This past weekend, my little girl turned 5.  Turning 5 is a big one!  It's right up there with 10, 13, 16 and 21!  And as a 5 year old, her world revolves around everything princess and romance.  I find it terribly endearing...that she has such a love for true love.  She is already waiting for her prince to come.  So, for her birthday present this year, we went dress shopping for a royal ball!

Eden had no idea why I was dragging her from store to store, trying to find the perfect ball dress.  She would have settled with the first purple dress we saw!  But it wasn't a ball gown, it was a party dress.  Yeah, yeah, I know.  Anyway, two days before the ball, we found the most beautiful dress...just stunning!  It was a size 7.  No problem!  Here in the UAE, there's a seamstress on EVERY corner, and your work is done in about 20 minutes!  I kid you not, within 20 minutes, we had an altered dress that fit like a glove! 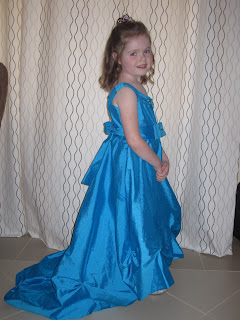 Now for the surprise.  She's dressed and ready, and still has no clue that she's going to a ball!  Daddy came out in his suit with a tie to match Eden's dress.  They looked so great together.  Then he showed her the event tickets with the horse and carriage on them.  Her eyes lit up, her mouth turned upward,and her face just beamed.  She knew she was going to a ball. 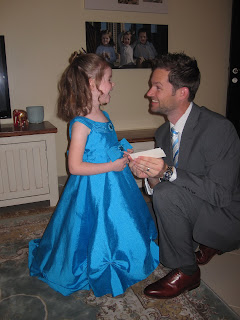 I was so giddy inside, knowing how truly happy my little girl was.  She was going to live out a dream.  She watches Enchanted and Tangled almost daily.  She talks about them, dreams about them, and just adores them.  Now she got to be a princess in a real ball gown.  So, off they went to enjoy the evening...just Eden and her daddy.  When they returned home, I got to hear all about the other princesses...the REAL princesses, Snow White, Belle, Cinderella and Aurora!  That just melted my heart.  She also enjoyed some chocolate covered marshmallows, dancing, coloring, story time and other festive ball-type activities. 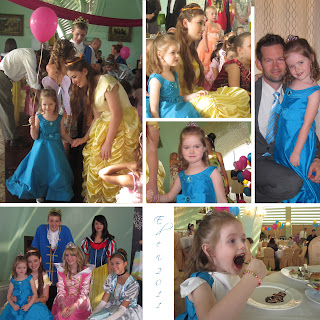 Happy Birthday Eden!  We love you!

No comments:
Email ThisBlogThis!Share to TwitterShare to FacebookShare to Pinterest

Goby.com is one of my new favorite travel apps!  Now you can find things to do while planning your next vacation, or even ON your current vacation all at the push of a button.  Your iPad, iPhone and Android are now even more valuable with this new app from Goby.

I think the think I'm most excited about it how EASY PEASY this app is to use!  Seriously, just type in the location you are heading to, dates if applicable, and let Goby do the rest.  They have over 6 million things to do around the USA!  You can even narrow it down to family, music, outdoors, or even restaurants!  Kinda like that little yellow book we all know, but WAY cooler and easier to use! 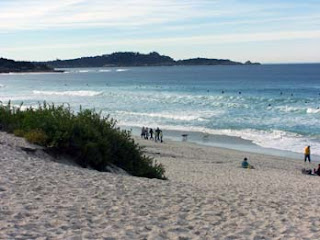 I recently went on and planned our future trip to Carmel, CA.  Take a look at this link to see everything you can do in Carmel...Carmel on Goby.  It's a fabulous place to visit for families, couples and outdoor enthusiasts!

It gets even better!  Goby is giving away an iPad2 and an iPod to a lucky Twitter party member on May 23rd!  Read all about it here, and you could be traveling in style with Goby on your side.
No comments:
Email ThisBlogThis!Share to TwitterShare to FacebookShare to Pinterest